I am testing new photo tanks.  The one that these photos were shot in is a little different than most that I make.  Most have a painted black back and a frosted glass bottom to diffuse light.  The biggest problem that I have is cutting down the amount of light that I throw on a tank.  So this time I painted the back, sides and bottom first with frosted glass paint to give it a texture (less glare) then with white paint.  The tank is 2 ½ gallons…about 12” across and eight inches high.

I used four Nikon SB-900 flash units on the tank.  One below, one on the back and two on the top.(picture attached) So I end up shooting at 1/320th of a second at an extremely low ISO and very high aperture (@f32). The amount of light that these four lights throw on that small area is amazing.  Any one of those flash units could illuminate a subject twenty foot away.

If I have to cut even more light I made a couple additional individual pieces of ¼” plexi that I painted in various depths (white to grey) so I can add that (one layer or more) to bottom or top to cut back light. If you are familiar with photo terms, the effect is like that of a neutral density filter.

I wanted the tank to be versatile enough to shoot all kinds of fish.  I have another piece of glass cut to the inside dimensions of the tank and painted black.  I can move the back wall forward and position with some channels that I made w/small industrial suction cups.  This just to keep some control over the fish.  If the fish goes too close to the back and hides, I adjust the movable wall to keep them in front of the tank.  I also cut two pieces of stone tile that I can lay at a diagonal from the front of the tank to the back…to photo catfish and the other bottom dwellers.

Here's the setup.  The flash units had to be tweaked for the correct exposure.  I had them on three separate channels firing on manual with the light being (more or less) top two full power, bottom half power, back light (I used a ring light) on three quarter. I used the camera flash at 1/128th power or slight fill...particularly needed with the macro shots.

Next I filled the tank with two small Hogaboomorum to test the lighting.  Here's the set up.  The small flashlight on the top helps me to focus. 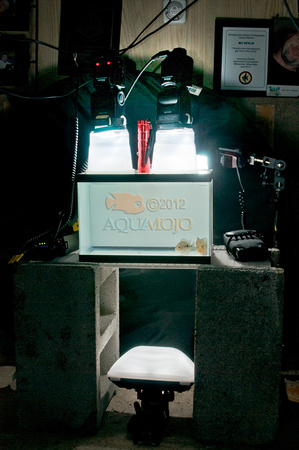 The results were OK.  But the fish would hug and hide.  So I went and got the larger male from the tank and added him.  That got everyone moving.  Here's two shots. 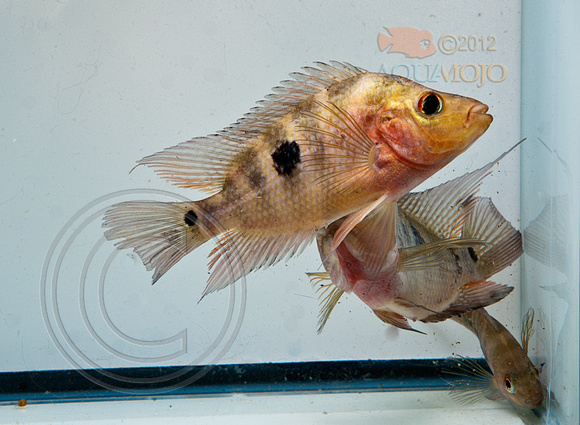 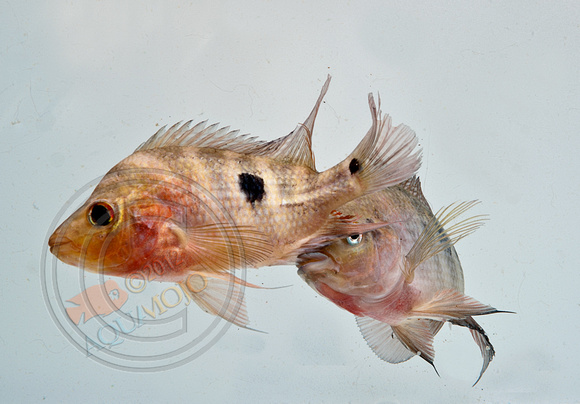 Next I added a net full of half inch P. fredrichsthali "La Cieba" fry to try the macro.  Wasn't sure what to expect. One of the challenges of shooting macro is the depth of field.  Less light means you have to open the aperture.  A wider aperture (lower number ex. f3.5, f4, ) Whe you shoot something this small, a higher aperture gives you bigger depth of field.  Here's two tips.  The farther back you can get and shoot, the better the depth o field...the closer...like with macro, the shorter (less of the area will be in focus).  The other tip is to "zone focus".  In this case, rather than focus on the exact part of the fish I wanted in focus, I would move down the body a little.  This assured me that I would get not only front, but back in focus...in most cases...becasue of the DOF range.

I am extremely pleased with the results.  Here's some of the better shots.

Considering the bubble at the top of the tank. 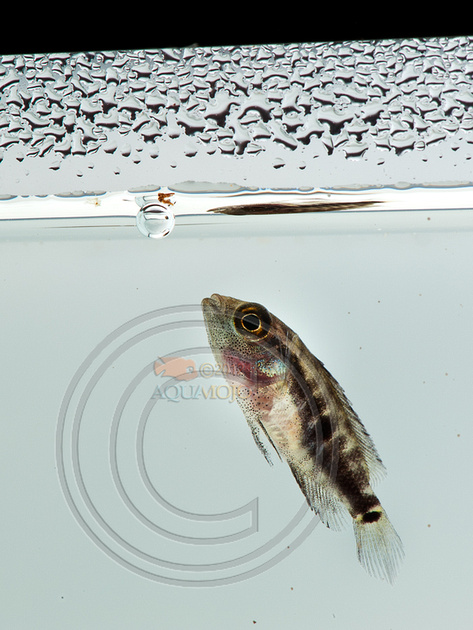 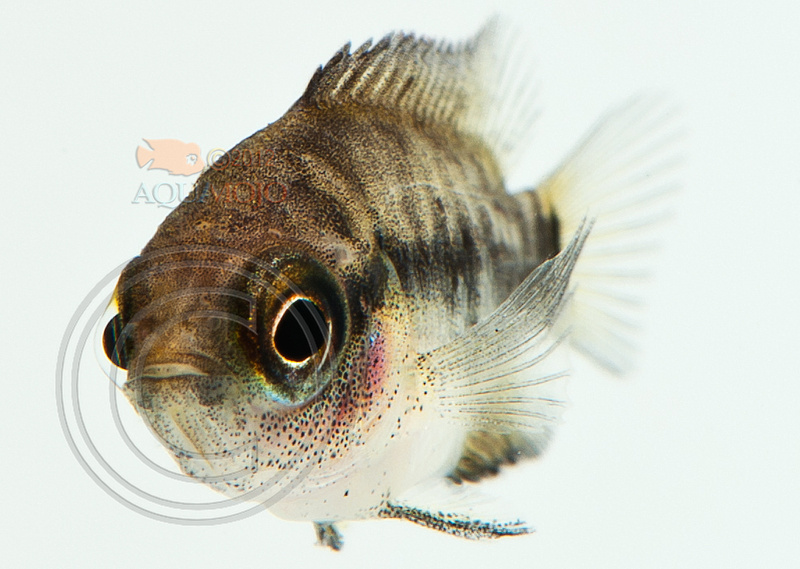 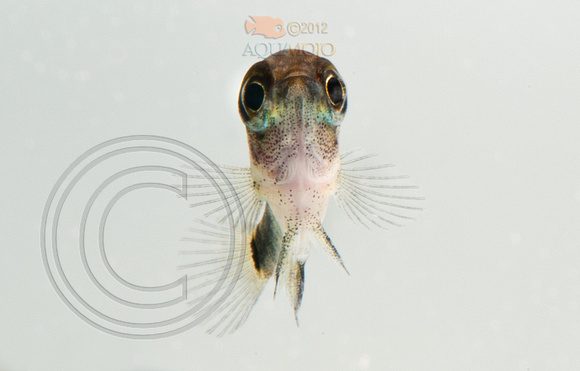 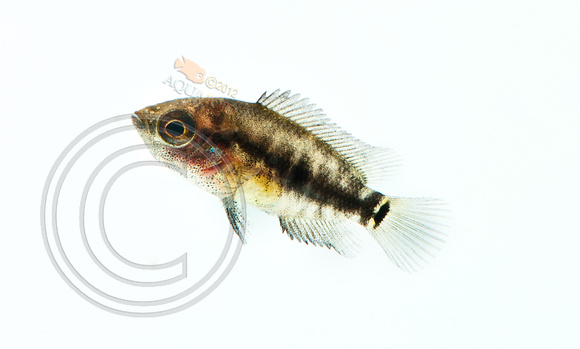 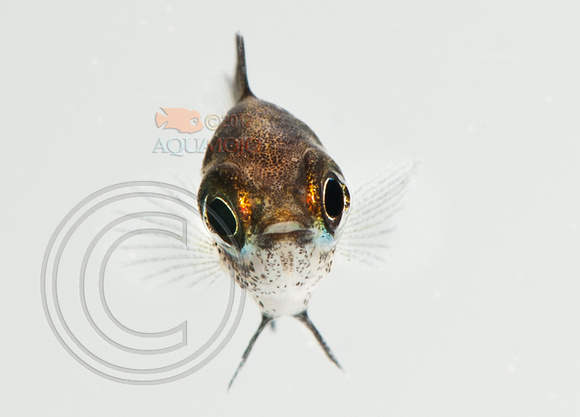 Here's a little guy that was so excited...he crapped himself. 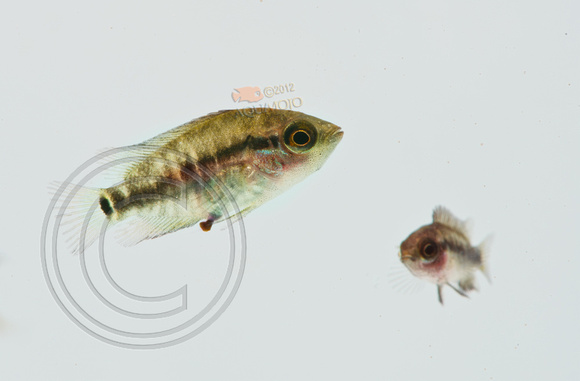 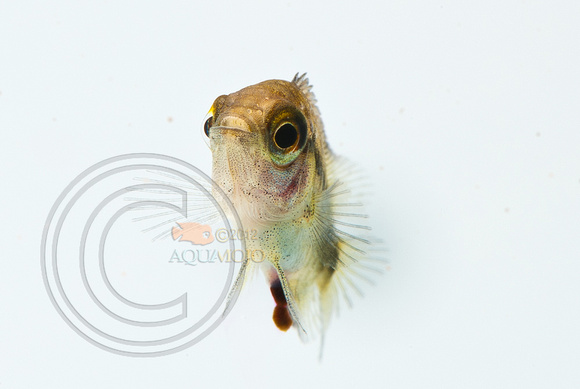 Not wanting to stop here, I swapped out the Freddies for some P. managuense "Xiola" ...these 1/4 inch and smaller. 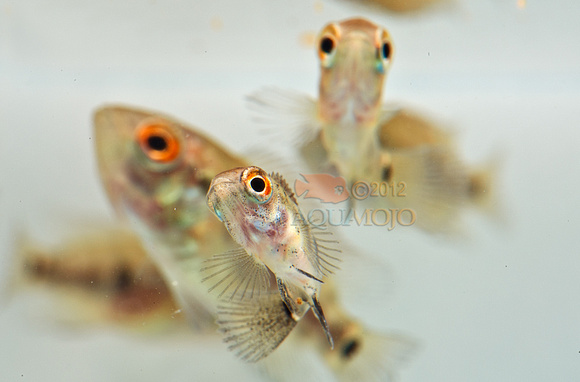 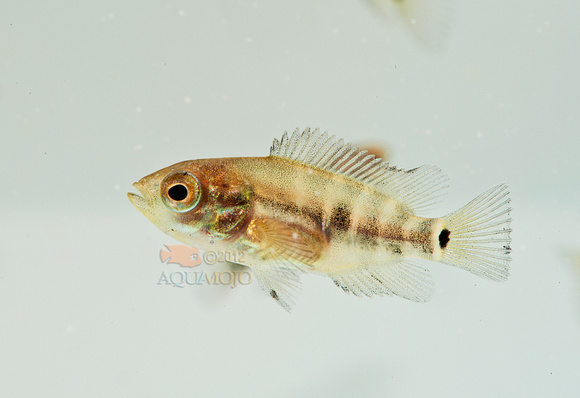 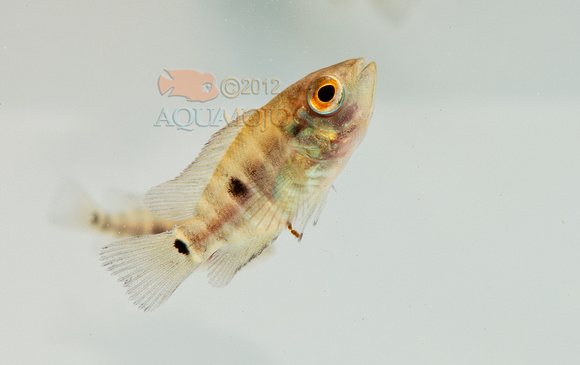 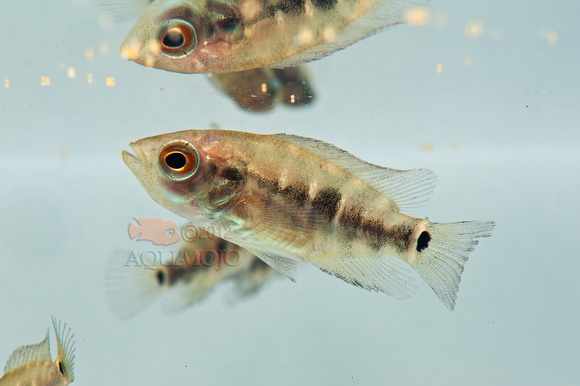 I put some decapsulated brine shrimp in with the fish. If you have ever used it, you know it's very very small.  IN the photos they look like regular pellet.  What I though interesting is that there is so little color on the fish that you can actually see the brine shrimp (color orange) that they are eating. 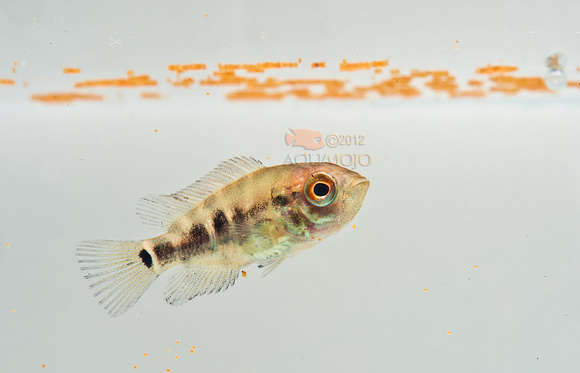 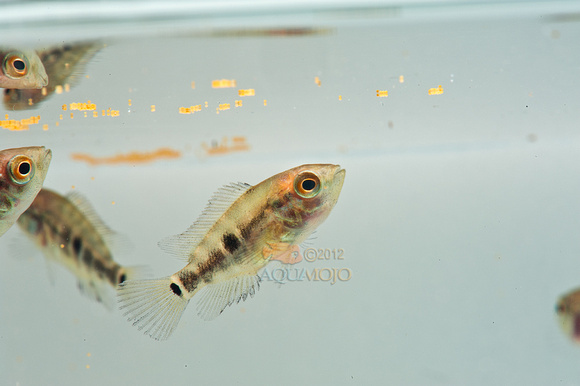 Couple other interesting observations...if you take a close look at the fish, it almost looks like their skin is comprised of dots.  I am assuming that the color of the fish is still developing.  Perhaps the chromatophores (pigment) of the fish is still developing.  The other is that the eyes are disproportionally large to the rest of the body.  Maybe natures was of giving the easily preyed on fry a better chance of seeing it coming.  I back this up with seeing tanks full of scattered tiny fry coming together as a group when they see me approaching the tank...waiting for food.  What they see, who knows...but without a doubt they react.

Hope you enjoyed this.  If you have any specific questions about the setup, I'd be glad to answer what I can.